We camped! And there weren't even heavy thunderstorms or projectile puke, which is most important. I will take pretty much anything over children vomiting in a location with no running water.

Everyone spent the best part of two days getting completely covered in dirt and running around like feral animals. The campsite is surrounded by a moat with alligators a fence, so we felt safe letting the kids bike around on their own and run a bit wild.

Camping is a strange thing, really: you pack up a MASSIVE amount of stuff, load it all into a van*, unload it again a couple hours later, unpack it all, spend a couple hours setting everything up, get it all really dirty, then pack it back up again and take it back home. I can understand why it might not appeal to everyone, but I love it. It's one of the few places where there really isn't anything to do but the absolute basics; you don't get distracted by running errands, you don't check your computer every 10 minutes, you don't do chores around the house, you just chill out. We cooked delicious meals, biked around, went to parks, told jokes and drank wine (as I said, the basics.)

We also used camping as an escape artistry test ground for The Baby. Turns out, he can now work zips. Up to now, this has been my only means of keeping him somewhat restrained at home so that I can do other important things like shower, go to the toilet and tweet about my kids. While camping, he learned how to completely unzip and remove his sleep sack, climb out of the travel cot, unzip the tent, and run to freedom. This is unfortunate for us, because what's next? Climbing out of his crib at home? Unlocking the front door, taking the car keys, and driving to Spain? I am trying not to think about it too much.

Next on the agenda: camp and holidays. Did I mention that it's sunny and warm in England? As in, ACTUAL HEAT, not "hey, look, there's the sun so it must also be warm so therefore I will find my smallest items of clothing and wear them and shiver." Or as someone so artfully put on Twitter, the weather forecast for this week is "Put Your Fucking Shirts Back On."
_ _ _ _ _ _ _ _ _

*Have I told you about The Van? Along with two other neighbors, Husband has joint custody of a hideous green former police van which gets used for important errands like going to the dump, transporting barbecues and motorcycles, and functions as a camping storage unit (when covered with an always-classy blue tarpaulin.) He and the other two owners spend a lot of time doing things like "changing the door handles," and "checking the oil," and sometimes they have Van Meetings at the pub. I would make fun of it more, but I've actually ended up needing it a lot, so I'll admit that it's practical. Ugly, but practical.

Of Tattoos and Vomit

We're going camping this weekend. What's that you say? Why yes, they ARE predicting thunderstorms. And did you mention stomach flu? Don't worry, only M has it for now, and I'm sure it will all clear up and not get passed to anyone else. It's highly unlikely that The Baby will start vomiting in the tent in the middle of the night.

I've been valiantly trying to control the spread of germs, but kids are gross not always consistent with hand washing, so I'm not sure how much good it will do. M has spent the last 24 hours throwing up and only just kept down some pita bread and half a banana. Now she is on her 500th hour of crap TV and seems to be getting a bit better. I, however, am just sitting here waiting for one of the other kids to start up because it's never just one. That wouldn't be a challenge!

Somehow, Husband has missed all the fun, timing a trip to Paris with the beginning of the barfing. I'm convinced that he has some sort of sickness radar that triggers an alert to European colleagues to schedule meetings in other cities the minute one of the kids comes down with something. It's OK though, I know who will getting up in the middle of the night to run a kid through the woods to the latrines.

On a bright note, I'm just about to take our friends' French au pair to the tattoo parlor (do they still call it a parlor? Somehow I don't think they do), so I'm pretty sure that nothing can go wrong with that!  He's looking for a souvenir of his summer in England, and he'd like me to translate his request to the tattoo-er (tattoo-ist? Despite a totally awesome tramp stamp, I have doubts about my expertise in this area.) How do you say, "I'd like an extra large image of Queen's face in the middle of my back, please?"

I have superpowers! Yesterday, I was able to get someone to scream bloody murder simply by turning off the television, and today I ruined someone's life when I put jam on the wrong part of the plate. It's not exactly laser vision or the ability to fly, but I bet if I work on it, I can get a kid to levitate with rage.

We are now counting down to the summer holidays, with only seven school days left until they break up. It's taking F...O...R...E...V...E...R. Everybody is grumpy, no one wants to do homework or put on their uniforms, and I'm lacking the motivation and creativity to make them do it. It's with sheer force of shouting that I get them out the door and walking to school, usually about 10 minutes late. Some people take a different tactic. A friend of mine showed up at school 30 minutes early last week, purely because she couldn't stand to have them in the house for a second longer and preferred to let the grumpiness run its course on the school playground.

It's not a very long summer break - only six weeks - but it means no schedules, no uniforms, and for us, a few weeks in France. So at least I get to shout at them in a really picturesque countryside setting.

It's time to call it a day when you start to see stuff like this: 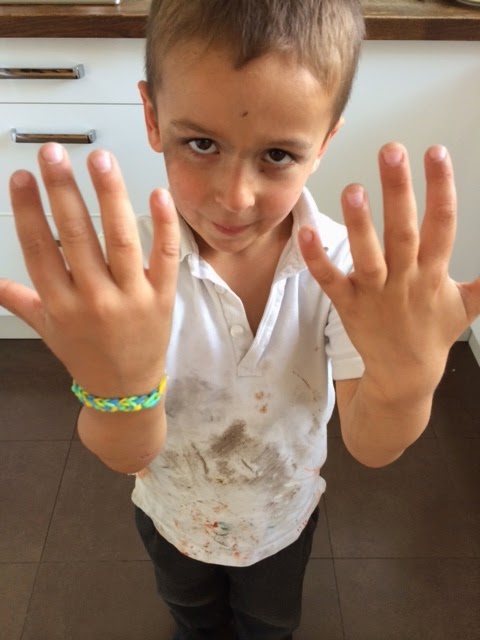 I mean, what the hell are they DOING at school? How is this much dirt possible in an academic setting? Aren't they supposed to be learning reading and math? Because that stain is made of at least 10 different substances and my money is on none of them being pencil. That loom band was not on his wrist when he left, and, wait, are his eyes covered in soot? What is happening here??

Come on summer, hurry up.